Kikutei Collection was deposited permanently to the Main Library, Kyoto University by late Marquess Kiminaga Kikutei in 1921 and 1922, and has been preserved and researched in the library. Thanks to the generous contribution from its current owner, the collection, together with additional related documents, was donated to the Main Library and has recently been registered as the library’s holding. This time, six items – four portraits of the family heads, a scroll of the family tree, and a well-known diary written in 1576, “Tokitsugu-kyo-ki (言継卿記)” – have been digitalized and released. As of January 21, 2021, Kyoto University Rare Materials Digital Archive provides 1,614,552 images of 19,436 titles.

The Kikutei (Imadegawa) Family was founded by Kanesue (1281-1339; 兼季), the forth son of Saionji Sanekane (1249-1322; 西園寺実兼) and was one of the highest status court families called the Seiga (清華) family which members can be appointed as Daijō-daijin (太政大臣). They served with their biwa (Japanese lute) skills and the 12th head, Harusue (1539-1617; 晴季), is well-known for his close connection with the Toyotomi administration, such as having worked as a mediator between Toyotomi Hideyoshi (1537- 1598; 豊臣秀吉) and the Imperial Court regarding Hideyoshi’s appointment to Kanpaku (関白). After the Meiji Restoration, the family received the title of marquess and the 26th head, Yukisue (1857-1905; 脩季), officially changed the family name to Kikutei, which had long been used as a pseudonym. 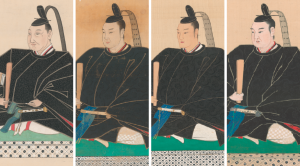 “Kikuteike keizu (菊亭家系図)” is a scroll that shows on its both sides the history of the Kikutei Family: chronological table, family tree, traditions and the records of the family members’ court offices.

"Tokitsugu-kyo-ki (言継卿記)" is a diary written by a court noble Yamashina Tokitsugu (1507-1579; 山科言継) during the warring states period (16th century). The collection includes part of it written in 1576. The entry of June 12 describes that Akechi Mitsuhide (?-1582; 明智光秀) was severely ill with dysentery during his siege of Osaka Hongan-ji. 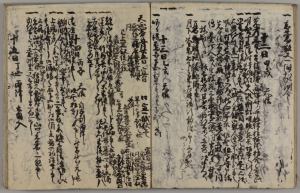 The digitization of the above-mentioned rare materials has been realized thanks to the contribution of the donors to the Kyoto University Rare Materials Digital Archive Fund. We sincerely extend our appreciation to their generosity, with our determination to continue this digitization project to preserve and make the best use of our rare materials at the same time, which we believe will lead to the promotion of research and culture.